This is something that we (and I think many other agents) struggle with in the market today. We meet with a client and go over what we believe should be the list price of a home and it's seldom a pleasant conversation. Typically, sellers know it's worth less than it was a few years ago, but getting the price right today really is more important than it used to be.

A home gets it's most activity from potential buyers in the early part of a listing period - the first 2 weeks. If it isn't priced for the market, it won't get an offer. Still, seller's feel they need to leave room to negotiate because they feel they need to squeeze every penny they can out of their sale. It's a fair enough idea, but it isn't grounded in what the data says they should do.

First, I'd like to discuss an important concept that regularly gets overlooked by both seller's and agents: It's impossible to underprice a home. Let me reiterate - you can't underprice your home. In a free market, it doesn't matter if you underprice by $1,000 or $50,000. It will sell for as much as the market will pay. Not more, not less.

So let's try to do a better job of recognizing the understandable objection about pricing and do a better job of explaining how the market works. If you list your home for the correct price, it will sell and it will happen fast regardless of your price point. It's not like homes aren't selling (see chart). 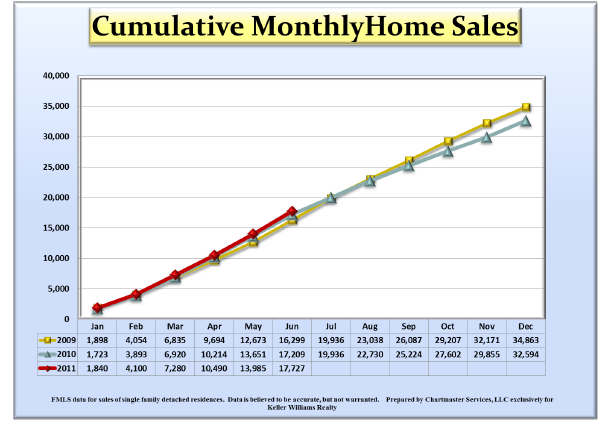 As you can see from this chart which shows home sales during this declined market, home sales are actually quite consistent. It's just that only the ones that represent exceptional value sell. If you price it at the right number, it's impossible for it not to sell. So the obvious question is that if you list it...