Below are all of the homes for sale in Glen Abbey in Alpharetta, GA. If you would like more information on any of these Glen Abbey real estate listings, just click the "Request More Information" button when viewing the details of that property. You can also "Schedule a Showing" if you are ready to go see a home. Use the tools to save your favorite homes in Glen Abbey as favorites and share them with others. Search homes for sale in Glen Abbey by map, school, price, style of home and more. Simply click the "Refine Results" button to get started.

The community of Glen Abbey is one of the larger neighborhoods in Alpharetta with 100's of homes. This affluent subdivision/neighborhood is popular due to its easy access to employment centers at the top end perimeter, Brookhaven, Buckhead and Alpharetta. Glen Abbey is located near Avalon and North Point mall.

﻿Homes For Sale in Glen Abbey

Listings identified with the FMLS IDX logo come from FMLS and are held by brokerage firms other than the owner of this website and the listing brokerage is identified in any listing details. Information is deemed reliable but is not guaranteed. If you believe any FMLS listing contains material that infringes your copyrighted work, please click here to review our DMCA policy and learn how to submit a takedown request. © 2020 First Multiple Listing Service, Inc.

As you drive down the tree-lined entrance to Glen Abbey, you are greeted by the clubhouse with 7 tennis courts, a basketball court, a swimming pool and spray park. As one of Alpharetta's premier swim/tennis neighborhoods, Glen Abbey remains one of the more sought after communities because of its proximity to Georgia 400 with access from either Haynes Bridge Road or Old Milton Parkway and its proximity to some of the best Alpharetta has to offer at Avalon and North Point Mall. The streets are wide with sidewalk and street lights and the homes are large including many with side entry 3 car garages. Glen Abbey is close to many of Alpharetta's cultural attractions like the downtown area and Verizon amphitheater as well so if you are considering a move in Alpharetta at this price point, you may want to look at Glen Abbey.

The Glen Abbey real estate market always has a number of homes to choose from because it is a larger community. The school system reports high test scores making Glen Abbey sought after for people who have an interest in schools with high test scores motivated to move here. There are plenty of parks and recreation for outdoor lovers as well nearby including the Big Creek Greenway and Wills Park.

Stay up to date with what's going. View all of the recently sold homes in Glen Abbey here.

Find all Glen Abbey homes for sale right here. Glen Abbey is an exclusive neighborhood of upscale homes located in the city of Alpharetta off Kimball Bridge Road between North Point Parkway and Old Milton Parkway. Homes for sale in Glen Abbey range from the $500,000's to the $800,000.

Glen Abbey has a very active HOA as well as social and civic committees. It has one of the better swim facility in any neighborhood in Alpharetta and includes a children's splash park and the Glen Abbey swim team. There are eleven lighted tennis courts available to the community as well with many ALTA, USTA and national champion tennis teams. An Old English-style clubhouse greets guests with a cozy fireplace, full kitchen and ample space for social gatherings and neighborhood meetings. There is an on-site workout room available in the clubhouse, a basketball court, walking trail, and two children's playgrounds.

Schools that serve Glen Abbey at the time of this writing are New Prospect Elementary, Webb Bridge Middle and Alpharetta High School. All of the schools are part of the Fulton County School system.

Search Homes for Sale in Other Alpharetta Neighborhoods

If you own a home in Glen Abbey and you are considering listing your home for sale, you will want to have the best marketing available so that your home will be elevated above the competition in a real estate market. Contact us to learn more about how your home can benefit from a combination of traditional and powerful internet marketing to place your home for sale in front of a much larger audience of potential buyers. 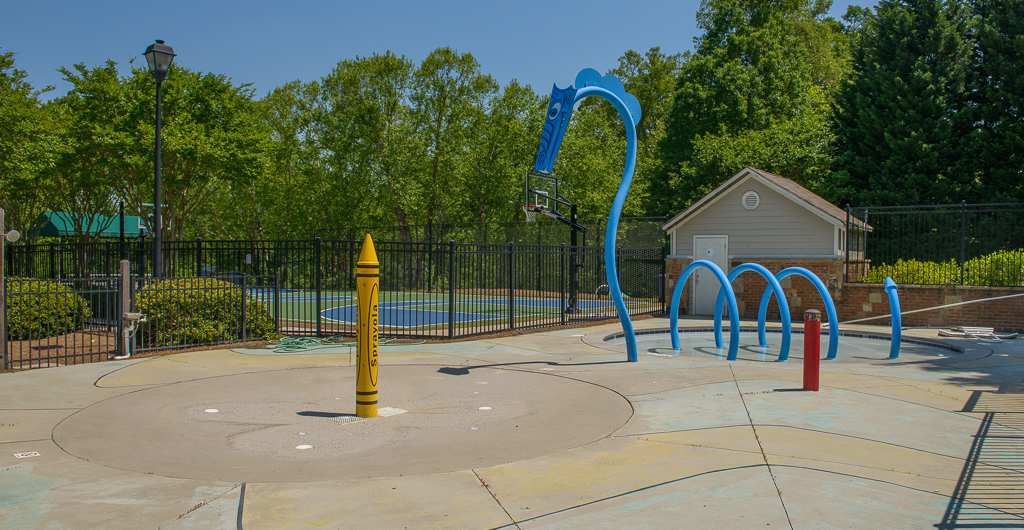 The pool and spray ground at the clubhouse in Glen Abbey

Glen Abbey has an active homeowners association with activities year round. You can get more detailed information and contact information on the official Glen Abbey HOA website.

Back to homes for sale in Glenn Abbey